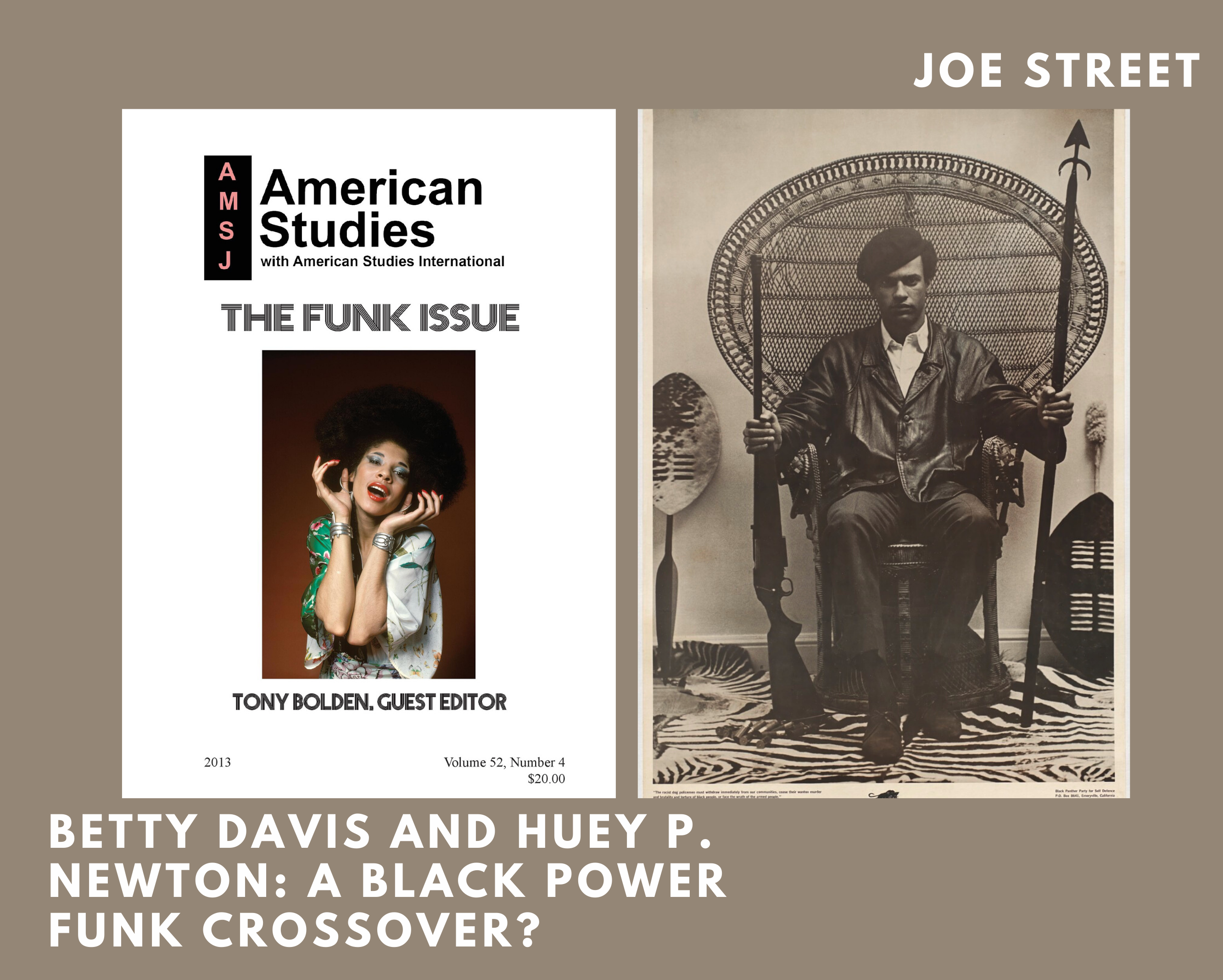 ‘You lied. You lied. I’m mad at you Huey because you lied to me. BUT HAPPY BIRTHDAY ANYWAY’

‘You lied. You lied. I’m mad at you Huey because you lied to me. BUT HAPPY BIRTHDAY ANYWAY’ wrote a ‘pen pal’ to Huey P. Newton, the founder and leader of the Black Panther Party. ‘I still love you Darlin, I hope the FRONT makes you smile.’[i] The front referred to a publicity photograph. It featured a powerful young African American woman, staring down at the camera, with backlighting emphasizing her voluminous natural.

This enigmatic communication appears at first to be a particularly intense example of the many fan letters Newton received. Yet its location in the Huey P. Newton archival collection and the existence in the same folder as the following photograph both reveal the identity of this mysterious pen pal and prompt further questions about Newton’s fame and the nature of Black Power, African American radicalism, African American music, and the wider culture in the 1970s.

For this is a publicity photograph promoting the new album They Say I’m Different by the funk singer Betty Davis, released in 1974.[ii] Davis was, of course, an iconic figure to a small but significant number of African American music fans. A model, actor, songwriter, singer, and musician, she achieved renown in New York circles during the mid-1960s before meeting and then marrying Miles Davis. Famously, she transformed the trumpeter’s life and music before his abusive treatment overwhelmed their relationship. It seems compulsory now for any mention of her to highlight her revamping her husband’s wardrobe, prompting him to ditch the black suits in favour of garish shirts, flared trousers, and hip sunglasses. More important (and equally compulsory to mention) she prompted the electrification of his music via introducing him to the sounds of Jimi Hendrix (a friend of hers) and Sly and the Family Stone, initiating the last truly great phase of his musical career. In 1973, she released her first album, which includes a list of collaborators that still takes the breath away: Greg Errico (drummer with Sly and the Family Stone), ex-Family Stone bassist Larry Graham, Santana’s Neil Schon on guitar, the legendary horn players from Tower of Power, and on vocals the Pointer Sisters and the one-and-only Sylvester.[iii] By the time of the letters, Davis was in the final stages of working on the follow-up with a smaller band.

Sadly, neither album received the attention nor sales they deserved and they languished in relative obscurity until they were reissued in 2007, sparking a minor renaissance for Davis, which peaked with 2017’s Betty: They Say I’m Different documentary about her life and work. The accompanying reappraisals of her work focused intently on her marriage and the raw sexuality of her lyrics and vocals, with occasional nods to her dismissal of white feminism.[iv] Here, thanks to the positioning of her vocals front-and-center in the mix, which focuses the listener’s attention on her risqué lyrics, Davis appears almost hypersexualized, asserting herself over her male paramours. Such an approach depoliticizes Davis, presenting her and her music as almost non-political expressions of female sexuality. Of course, as Parliament’s citation of ‘Swing Low Sweet Chariot’ in its ‘Mothership Connection’ suggests, the worlds of funk, pleasure, and politics were not mutually exclusive.

Davis’s relationship with Newton confirms the myopia of such an approach. While the letters might not present her as a Black Panther, they certainly add to her personal mystique and beg further questions about her role as a political and cultural icon. Sadly, she did not date these communiques, although references within them to Newton’s birthday and the Symbionese Liberation Army date most of them in early 1974.[i]They suggest that Davis and Newton met at least once, and that Newton was charismatic enough to make a profound impression. Each letter expresses her concern for his mental health and more than one sympathize with him over the pressure he faced as head of the BPP.

At this point, the BPP was in the early stages of its terminal decline. In 1973, it spent considerable energy on a major municipal campaign to elect Party Chairman Bobby Seale as Mayor of Oakland and Minister of Information Elaine Brown to the City Council. Both were defeated, although Seale came second in the first round of elections, taking the incumbent Republican John H. Redding to a runoff. The campaign exhausted the remaining members of the BPP, who began drifting away not long after the campaign concluded, due to a combination of reasons including fatigue and financial pressures. Newton, meanwhile, faced different burdens. Isolated in his Oakland penthouse apartment and under constant surveillance from the FBI, he was assailed regularly by adoring followers, journalists seeking interviews, police investigating alleged criminal activities, and members of the BPP hierarchy desiring leadership.[ii] Between 1972 and 1974, he was involved in numerous violent incidents.[iii] J. Herman Blake, the co-author of his autobiography, Revolutionary Suicide, was also suing him for non-payment of royalties.[iv] Meanwhile, Newton drew closer to the seedier elements in Oakland’s nightlife, with rumors swirling that he hoped to use the BPP to gain control of Oakland’s underworld.[v] In February 1974, soon after returning from a Caribbean holiday, Newton expelled all but one of the Hilliard family, believing them to be at the core of a planned coup. David Hilliard had been one of the BPP’s earliest recruits and was staunchly loyal to Newton. Soon afterwards, the BPP’s co-founder and Chairman Bobby Seale departed in mysterious circumstances.[vi]

Such pressures possibly explain why Davis regularly refers to Newton’s inability to commit to her. Yet through her upset, Davis maintains a genuine concern: ‘it really hurts my heart to hear what’s going on out there. I can imagine how you’re feeling and what you’re going through now.’[xi] In another she expresses her concerns about Newton’s mental health before alluding to the BPP’s political program:

It did my heart well to hear your voice. I know how busy and troubled you must become. I know your responsibility and your concerns for the people. I know you’re a collective person…. It makes me care for you more. That’s just the woman coming out in me my darling. But at the same time that other part of me realizes how unimportant I am compared to everything else.[xii]

Here, Davis cites Newton’s subsuming of his individual needs within the collective needs of the African American community. The intrigue lies in the phrase ‘you’re a collective person,’ which suggests that Davis was not. And yet she indicates a clear understanding of the relationship between her individual desires and the collective needs of the community, to which Newton declared devotion. Thus while she might not have explicitly cited one of the BPP’s famous slogans or ideals, she surely knew that the people’s struggle was paramount.

As this suggests, then, numerous questions arise from these letters, ranging from the mundane (how and why did they meet? Who, if anybody, introduced them and why?) to deeper questions about Davis’s role as a political figure and Newton’s thinking at a critical moment in his and the Black Panther Party’s life. Her records pushed the boundaries of African American music at the time; was she also pushing at the boundaries of African American political thought?

[iv] For example, Jon Pareles, ‘Betty Davis Was A Raw Funk Pioneer. Her Decades of Silence Are Over’ New York Times May 22, 2018 at https://www.nytimes.com/2018/05/22/arts/music/betty-davis-they-say-im-different-documentary.html (consulted January 28, 2020); Natalie Weiner, ‘It’s Still Not Betty Davis Time, But We’re Getting There’ Jazz Times October 2, 2018 at https://jazztimes.com/features/profiles/its-still-not-betty-davis-time-but-were-getting-there/ (consulted January 28, 2020).

Joe Street is Associate Professor of Humanities at Northumbria University. He was on the Executive Committee of the British Association for American Studies from 2013 to 2019, is a member of Historians of the Twentieth-Century United States, and a Senior Fellow of the Higher Education Academy. His books include The Culture War in the Civil Rights Movement (University Press of Florida, 2007), Dirty Harry’s America: Clint Eastwood, Harry Callahan and the Conservative Backlash (University Press of Florida, 2016), and an in-progress history of the Black Panther Party.